Home » Poop transplants are the final frontier in athletic doping 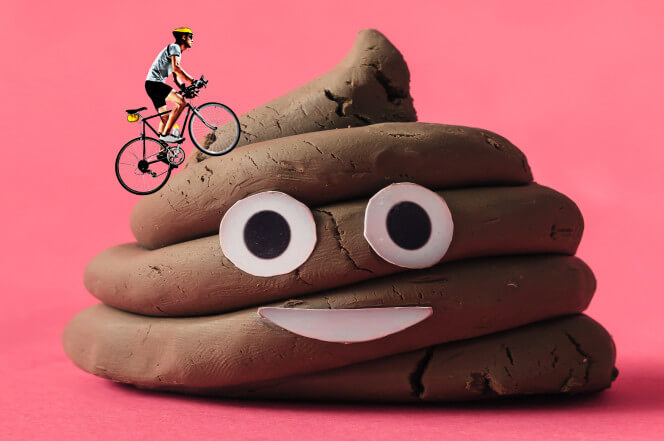 Athletes enhance their performance in all sorts of different ways: swallow pills, inject drugs, or even get transfusions of their own blood.

But one cyclist has discovered a new avenue in the world of performance enhancers: poop.

Apparently, getting a fecal transplant from a competitive cyclist can boost your body’s ability to convert food into energy, at least according to microbiologist Lauren Petersen.

Petersen, a researcher at The Jackson Laboratory for Genomic Medicine in Farmington, Connecticut, came to this startling realization through personal experience.

At just 11 years old, Petersen contracted Lyme Disease and was forced onto a heavy regimen of antibiotics. The treatment helped her battle Lyme Disease, however, there was a downside.

“I had no microbes to help me break down food, and I had picked up bugs in the lab where I was working because my system was so weak and susceptible,” Petersen told Bicycling.com.

What’s worse, during graduate school Petersen had her digestive system tested and discovered that she was full of gram-negative pathogens. Common strains of the pathogens include E.coli and Salmonella.

Petersen knew she needed to do something, but she couldn’t find a doctor to help her. So she gave herself a fecal transplant from a competitive cyclist.

The results were astounding. Shortly after the transplant, she was able to train five days a week instead of her usual two and she was able to move from amateur to pro endurance bike racing.

“I wondered if I had gotten my microbiome from a couch potato, not a racer, if I would I be doing so well,” Petersen recalls.

It turns out that Petersen probably would not have been doing as well if she’d gotten a couch potato’s poop. Gathering a plethora of poop samples from amateur and professional bike racers, Petersen got to work in the lab and discovered that elite athletes are full of a microorganism called Prevotella.

“The more a person trains, the more likely they are to have Prevotella,” says Petersen.

“In my sampling, only half of cyclists have Prevotella, but top racers always have it … it’s not even in 10 percent of non-athletes.”

While Petersen is still trying to figure out everything Prevotella does for top athletes she already knows that it plays a critical part of muscle recovery.

Prevotella, however, is not the only thing Petersen discovered in her stool samples. She also found that top athletes are more likely to have an ancient microorganism called Methanobrevibacter smithii, or M. smithii, in their guts.

Again, Petersen isn’t 100-percent sure how M. smithii helps performance, but it is not hard to imagine how it could be helpful. To put it plainly, M. smithii eats the poop created by the bacteria in our digestive system, converts it into farts, and as a result, our systems pull more energy from the food we eat.

M. smithii achieves this feat by combining the hydrogen “pooped” by the bacteria in our stomachs with carbon dioxide to create methane. Methane is one of the primary non-smelly gases in human farts. Besides creating flatulence, decreasing the amount of hydrogen in our gut increases the amount of calories that are extracted from food, a study published in PLos One suggests.

It thus makes sense that tip top athletes like pro cyclists would have lots of M. smithii in their system.

Unfortunately for all the weekend warriors out there, you can’t go to your doctor and ask for a fecal transplant full of M. smithii and Prevotella because the procedure has only been approved for the treatment of Clostridium Difficile — a potentially life-threatening infection of the colon — by the Food and Drug Administration.

Petersen, however, is not giving up hope that her research may one day make its way to athletes around the world.

“What we’re learning is going to change a lot for cyclists as well as the rest of the population,” says Petersen. “If you get tested and you’re missing something, maybe in three years you’ll be able to get it through a pill instead of a fecal transplant. We’ve got data that no one has ever seen before, and we’re learning a lot. And I think I can say with confidence that bacterial doping — call it poop doping if you must — is coming soon.”

Purchase Review and Test on hormone-peptide